Kaley Cuoco prepares to take off as both actress and executive producer of The Flight Attendant. Cuoco’s had no shortage of offers post-The Big Bang Theory. But the 34-year-old actress wasn’t in a rush. “I had never considered my life past Big Bang,” she says. “It went on for so long, but I didn’t want to just take on the next project without having a reason to do so.”

That reason ended up finding Cuoco while scrolling through Amazon Books. There, a one-sentence description of Chris Bohjalian’s thriller The Flight Attendant was enough to grab her: “A flight attendant wakes up in the wrong hotel, in the wrong bed, with a dead man—and has no idea what happened,” says Cuoco. “My first thought was, ‘What a cool story.’ My second thought was, ‘Does Reese already own the rights to this book?’”

Witherspoon hadn’t purchased the rights, but plenty of others were interested. So Cuoco fast-tracked her interest in the book, which she describes as a “wild and fun story,” and launched her own production company, Yes Norman, to take it to the small screen. (Norman is one of her many dogs.) 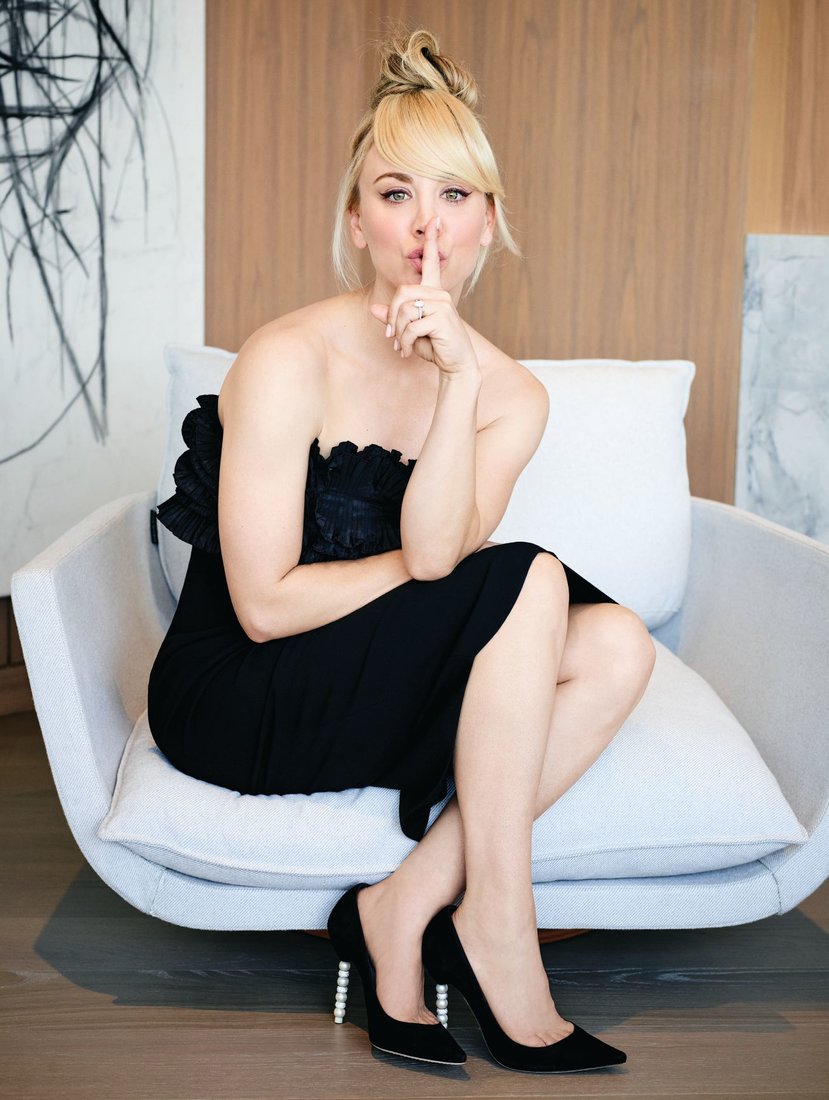 Fast-forward two years later. Cuoco is in New York shooting the final scenes for the eight-episode limited series that took the crew to Bangkok and Rome before production was halted by the pandemic. “We finished filming episode six on a Friday in February when everything was shutting down in Italy,” says Cuoco, who is both the executive producer of The Flight Attendant and the star, Cassandra Bowden, who is taken on a Hitchcockian journey of physical and mental turbulence. (She also serves as an EP on the hit animated series Harley Quinn, which was recently picked up for a third season.) “We got back to New York and continued shooting there in February, then in the middle of March, it all shut down,” Cuoco explains of the series, which premieres this November on HBO Max. “We thought we would be off two weeks. That turned into five months.”

And while the halt in production paused her first major project since The Big Bang Theory— which earned her the No. 2 spot on Forbes’ richest actresses list behind Modern Family star Sofía Vergara—Cuoco says the hiatus marked the beginning of an entirely different life.

The big shift involved moving into the same house with her husband. Although Cuoco married Karl Cook in 2018, the two hadn’t officially lived under the same roof due to competing crazed schedules. Cook is a professional equestrian who competes around the world. “We bought a house together last year but I was leaving for New York to start filming. Then quarantine happened, Karl couldn’t go to his horse shows. Suddenly we were home alone for the first time ever,” she says. Home is a Hidden Hills equestrian community compound that the couple purchased in 2019, half completed. Cuoco says her sister and her best friend, who is an interior designer, surprised the couple by decorating the entire house. “They have amazing taste. I designed nothing in it and love everything,” says the actress, who shares seven dogs and many horses with her husband. “During the first few months of quarantine, Karl and I worked out together. We cooked together. We spent time with our animals. It was absolutely awesome. We would have never had that opportunity otherwise.”

Cuoco also had an opportunity to expand her pet family during the pandemic. “I do a lot of animal rescue, and when I was coming back to New York, I thought, ‘I’m going to foster a dog.’” Dump Truck, aka Dumpy, was the lucky pup, but Cuoco’s ability to relinquish the chihuahua wasn’t quite as successful. “Every time I’d get an application to adopt him, I’d start crying. And then I wouldn’t respond. Finally my husband said, ‘On what planet were you not keeping this dog?’ It was a total foster fail.” 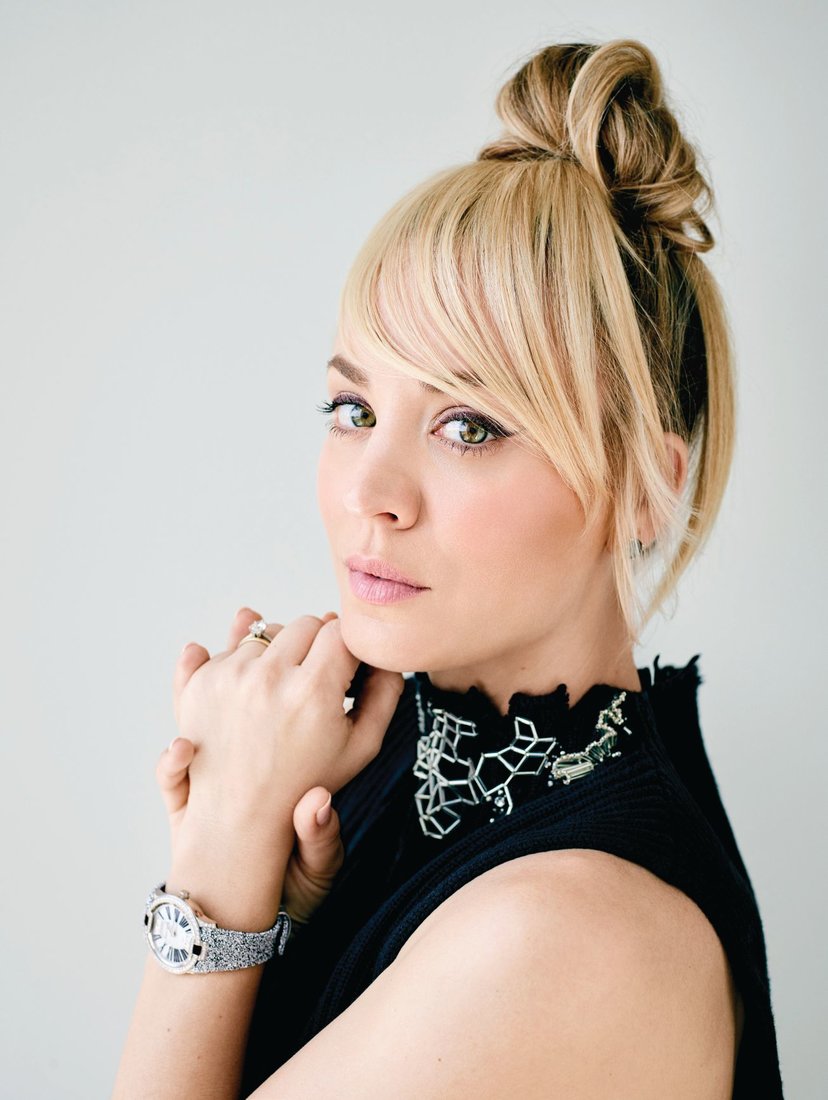 Today, Cuoco is back in New York City finishing filming the final scenes, with Dump Truck in tow. “He’s very small and calm,” she says. “I’m an OK flyer, but with him and a nice cocktail, it really helps.”

As executive producer, she also spends long hours going through dailies. “I’m surrounded by a group of unbelievable producers,” Cuoco says. “Every one of them is female except for one, which is pretty spectacular. It has felt like a supportive group from day one. I’m now the small fish in a big pond, which I love. This is all so different than... when I’m an actor and don’t see... my work until it’s completed six months later.”

Cuoco admits that protocols have made production a different experience from what she’s used to. “I’m used to being on set and hanging out with everyone all day,” she says. “Now with the rules, I have to be in my actor bubble. They’re really serious about it, which they have to be. We get tested three days a week.”

And even as life begins to resume its pre- COVID-19 speed for the actress, she says some things will never go back to normal. “Before the pandemic, we always worked so much we would have dog walkers,” she says. “We still need them, but one of the best things about being home was walking them every night. It was incredibly special. That is always going to be a priority.”